Radicals Preparing a Crusade on Poroshenko

In preparation to host guests, three parties of Ukrainian Nazis, the Right Sector, Freedom, and the National Corps, created on the basis of the Azov battalion, signed a manifesto on joint efforts and a common platform. The document includes recognition of Ukrainian as the only state language, disruption of diplomatic relations with Russia, militarization of Ukraine, and nationalization of the country's strategic industrial facilities. Radicals are behaving more and more impudently and thus are snatching more and more power. This means that Ukraine is moving towards a regime change which will be even more nationalistically strict, and, in relation to Donbass and Russia, more hostile. Simply put, the party of war is coming closer to power in Kiev. The party of war is already so strong that it dictates its terms to President Poroshenko. 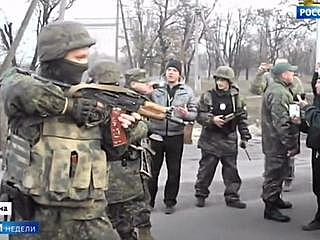 Three years ago during the state coup, Poroshenko used paramilitary Nazis as a decisive means to seize the power. Now, these Nazis are the ones who control Poroshenko himself, who does not have the strength to resist them. A typical situation when the tail wags the dog. For Poroshenko, who effectively lost his real power, it's now important to be able to catch up, to follow the initiatives of radicals, even if their actions openly harm the country. If he is too far behind and thereby irritating the Nazis, they'll simply do away with him. At least, politically.

Last week, from the Nazi point of view, Poroshenko behaved well. He was in a hurry to catch up. He supported the trade blockade against Donbass and agreed to introduce the sanctions against the Ukrainian subsidiaries with a share of Russian capital. Both measures will completely destroy the economy of Ukraine. But even for a while, for months or even weeks, it will prolong, though the infamous, but still presidency of Poroshenko, at least until the next tranche from the IMF and the Eurovision Song Contest. After him comes the flood. Olga Solovieva reports on the situation in Kiev.

Calm down and put down your weapon! A submachine gun was shot in the air as a symbol of powerlessness of Ukrainian policemen against the approaching horde of radicals. The checkpoint near Konstantinovka. Participants in the Donbass blockade drove through it to get to the demarcation line to control the movement of freight trains. The police refused to let them in. In response, the radicals first sprayed gas, and then pushed the concrete blocks and the police car off the road. Glory to the heroes! This tone of behavior was set by one of the leaders of the blockade, people's deputy Vladimir Parasyuk. Together with him, the automobile column of radicals headed to the redoubt through Slavyansk. Parasyuk first waved his deputy's license and demanded that not only him, but everyone else be allowed to enter without any inspection. Is a phone a document? On the webpage of... — Is a phone a document? — Are you stupid? Then he attacked the law enforcement officials. Calm down, calm down. The brawler was detained, but released the next day. The policemen decided to ask for protection in the Verkhovna Rada. Deputy Parasyuk attacked the policemen with swearing and insults. He called them scum, bastards, and separatists, and tried to break through the cordon on his own.

Police can’t stop the radicals. The control of the situation is lost. It’s also clear for President Poroshenko, who first opposed the blockade. However, at the meeting of the NSDC, the head of Ukraine decided to follow the principle of "leading what he can’t control" and supported the blockade of Donbass at the state level. At the same time, he called the vigilantism of the radicals "Makhnovism" and asked to calculate the losses from their actions. The fact that the actions of those who organized the blockade will cost a lot for Ukraine is obvious. The calculation will show how much.

The Ministry of Finance was to publish the data on March 16, but there are still no results. In early March, the indicative figures were announced by Prime Minister Groisman. We are talking about 75 thousand people who can lose their jobs. We will lose 3,5 billion, and this is true, 3,5 billion dollars. This will negatively affect the dollar exchange rate. Everyone will bear losses, and ordinary Ukrainian citizens will pay for it. At checkpoints, not only gangs of radicals, but also fighters of the National Guard are on duty. The first victory was that they arrested three hundred kilos of wurst. One of the locals carried it in the trunk of his car to sell it to a local store. Wurst, sausages, bockwurst, bockwurst with cheese. Because of the blockade, the settlements near the line of demarcation are still without Donetsk coal. The one that Kiev supplies is no good. That's all they bring to us. Dust with water and that’s it. Because of the coal shortage, factories are working at half capacity. The work day was shortened for the workers, and, respectively, the salary is lower. Or they can even been sent to unscheduled holidays.

Slavyanskaya TPP stopped working in mid-February. They ran out of anthracite, which was imported from Donbass. While the city remains without heat, people's discontent grows each day. Right-wing radicals see that the president is very weak, and that anything can be demanded from him. Today, the task of the authorities is to prevent the third Maidan. This is the key task. For this reason, the authorities are ready to do absolutely everything. A wave of mass protests spread throughout Ukraine. The reason for the popular unrest is the detention of forty members of the blockade at the redoubt in Krivoy Torets. A whole arsenal was found: hand grenades, machine guns, Molotov cocktails. Hundreds of people gathered at Maidan in the capital of Ukraine. First, they demanded the resignation of Poroshenko near the walls of his administration. And then, they went to the office of Ukrainian oligarch Rinat Akhmetov. Inspired by impunity, the nationalists showed their hatred by destroying the branches of the Russian banks. This video shows an Alfa-Bank's branch being destroyed.

The young men from the National Corps sealed the entrance to the head office of Sberbank in Kiev. The protesters are on duty around the clock. They even put up a small camp out of tents and soft chairs, which are used for sleep by taking turns. Radicals announced that they were there to the last, until the closing of the last Russian bank in Ukraine. In the situation with banks, Poroshenko took the side of radicals again. He instructed the National Bank to develop sanctions against financial institutions, in which there there are Russian shares.

The National Bank said at first that there were no questions to the Russian banks. To this day, from the point of view of supervisory requirements, we have no claims to these banks. It turns out that the decision to impose sanctions against the banks with Russian capital is purely political. Sanctions were introduced against Sberbank, VTB, Bank of Moscow, Prominvestbank and ViEs Bank. At the same time, the banks are holding one and a half billion dollars. This is Ukrainian money. In “Sberbank” alone there are two and a half thousand Ukrainian citizen employees. Mutual economic interest was the main lever for restraining the military conflict in the southeast of Ukraine. After Kiev destroyed it, no one excludes the escalation of hostilities.

Leaders of the forbidden in Russia Right Sector, the Freedom Organization, and the National Corps, signed a joint manifesto with a number of requirements, such as severance of economic ties with Russia, free weapons bearing, restoration of nuclear capabilities. One more thing is the impeachment of the president. We are beginning our crusade against this power, against this system. For a new, our own great Ukrainian Ukraine. Poroshenko will hardly be able to come to an agreement with such nationalists.